Your friendly blogger has an innate allergic reaction to branding, formulae, mantras. Whether it’s the constant repetition of changed … forever [v last week’s entry] or 17.4 million voters or Radio Three’s repetition of New Generation Artist’s Scheme, he reacts negatively, possibly as an instinctive form of defence against their constant drip drip drip. Worryingly this is maybe what the plot of Quatermass and the Pit is getting at and you will be heaving telekinetic rocks at your correspondent when the next cull comes round (very soon, I fear).

While attending a number of Edinburgh Fringe comedy shows, from the stars of stage and telly, to the up-and-coming (or down-and-unlikely-to-come) stars of tomorrow, the formulaic aspects seem so jarring and jading and, for this outsider freak, spoil the pleasure. Don’t regular audiences ever tire of the performer’s own voice bidding them welcome him or her to the stage or the faux enthusiastic holler of How ya doin’, Edinburgh? Are you well? ?

OK, some, especially Paul Foot, play with those conventions a little, but from that intro to the naked callbacks and on to the claim that you’ve been a lovely audience, I’ve been Jolly Jim Jardine, and goodnight. it all feels like the same old same unoriginal.

Some years ago an encounter with some comics and other entertainers in an Edinburgh pub led to the idea of doing a double act with a more experienced performer (no names, no pack drill). This led to threats of violence, but also to the idea of a double act split over two venues. The conceit that grew from this was that Lowe and Jardine (let us say, for ’tis not a real person) have agreed to do a double act, written it and booked places for it, but a fight over top billing has led to a breakdown in communication, and the booking of two venues. After an exchange via mobile phones, each would stubbornly go on with his half of the set, which would have to be written (like a concentrated Ayckbourn idea) so that either set would be funny but only seeing both (in either order) would reveal the full humour. About five minutes got written before shiny things once again distracted your loyal simpleton.

This year’s ‘big’ idea is to piss about with the aforementioned conventions. The first idea was to play the inexperienced comic, with a card, read from in a desultory fashion, at each point acting out the realisation that the actions haven’t matched the intent; eg walking to the front of the stage before reading, Ladies and gentlemen, please welcome to the stage … oh.

But then it seemed it might be fun to do the whole damn thing in reverse. Either reversing the sense — from an opening, I’m going to be Dai Lowe, you’re going to be a wonderful audience, through to Gentlemen and ladies, did you have a good time? Please say goodbye to Dai Lowe — or actually doing the usual stuff but in reverse order (ending of course with the explanation of why it’s being done so, just before saying, Please welcome to the stage …).

This leads to the question of writing routines or gags than can start with the punchline and still amuse — and adding a few call-forwards in the early stages. You might think that they just become callbacks again, but not if the extended use of the theme comes some time after the brief (and probably baffling) ‘reference’ nearer the end — or should that be start?

Many a comic would blanche at the very idea of the above blog post. Most pros are miserable buggers in real life, terrified that anything funny they say might get nicked, and that’s a much bigger worry if it’s a whole concept getting purloined. But I’m a solitary, slow-moving, lazy bastard, who will never get round to realising either notion — so if somebody can make one work, they’re welcome to it.

I’d appreciate a comp though, when the show’s in town.

The Spayne and Spigwell Advertiser sent their indefatigable reporter, Gladys Weems, to Edinburgh to check out the progress of local comedian Jolly Jim Jardine as he assaults the Fringe in more ways than none. 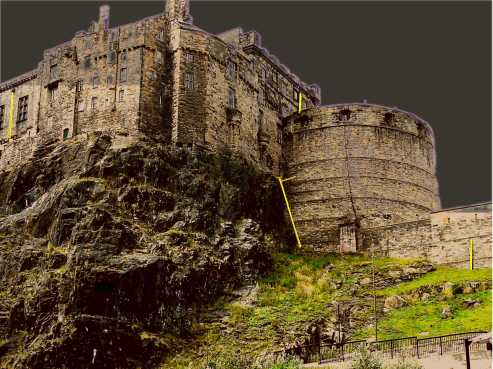 GW: No, I can’t see any reason why you should.

JJ:    Fair enough.  I think my main problem is the lack of audiences.  There’s just so much competition out there and a lot of the other comedians have what I’d call unfair advantages.

JJ:    Well, being famous, having done more on telly than just getting thrown out of an Apollo audience, having an army of publicity people giving out flyers, contacts in the big press, coming from bigger cities …

GW: Yes, but they were trying to annoy the audience from the start.  Then again, I understand you do that with your rather aggressive flyering technique.

JJ:    Yeah, but that’s sort of comedic in itself – gives them a flavour of the in-yer-face style …

JJ:    It works back home.  I can’t see why it’s so much less effective here.

GW: Just a suggestion, Jim, but it may be that Wyberton being small and Spigwell minuscule, means you know most of your victims.  No one here has any real fear that you’re going to smash their windows if you don’t see them at the gig.  And they’re not even their own windows while they’re up here.

GW: Including all those cases for damage to property back home?

GW: Obviously.  But I want to come on to the name change, Jim … or should I say, Andy?

GW: Was it an attempt to get away from the bad press?

JJ:    Bloody hell, no.  I’ve only made the nationals a couple of times anyway and no one from Spayne can afford to come to Edinburgh in August.  No, it was simple a funny idea I had. …

JJ:    Oi!  Seriously though, I was trying to get a spot at the Stand comedy venues, so I thought Andy Liver would make a fun name, in the context.

JJ:    Well, it is; maybe a bit oversophisticated for my audience …

GW: Both of them?

JJ:    Piss off!  I’ve had a few punters in the street get it, though they don’t seem to realise I already thought of it. If I’ve heard “You ought to be playing at the Stand!” from one person, I’ve heard it from six.

GW: Two of whom you attacked, I hear.

GW: Indeed.  Good job they’re not pressing charges.  But back to the title of your show.  It is actually taking place in a potting shed, I believe?  Somewhere in Stockbridge?  Is that part of the PBH Free Fringe?

JJ:    No, they wouldn’t have me either. So I found this potting shed … I think the owners are abroad somewhere.  Hope so anyway.  Saves accommodation costs, too. And it’s more a sort of JJJ Negative Fringe.

JJ:    Yeah.  And before you ask, it’s negative in that I’ve taken to paying people to come.  Thank fuck the shed only holds about six people.

The interview was terminated at this point when Jardine/Liver grabbed our reporter by the throat and attempted to strangle her.  He was remanded in custardy at Edinburgh Sheriff’s Court.  All further performances of Potting Shed Andy Liver have been cancelled.

The vaguely real and occasionally funny Dai Lowe is appearing in Well, It’s Woody, daily at The Street Bar, 2 Picardy Place, EH1 3JT.  Check out the PBH Wee Blue App for details of that and loads of other shows by the stars of tomorrow, the has-beens of yesterday and the no-hopers of today, all performing for whatever you’re prepared to chuck in the bucket at the end.