Thank you forr everty other wonderful article. The place
else may anyone geet that type of information iin such an ideal way of writing?
I havfe a presentation next week, and I’mon the search
for such info.

Is it that most bloggers are trying to provide informative informational information, or are those that do the best victims for spamming?

I mean, even if I have, once in a blue moon, provided some food for thought or expressed an opinion that has made someone think (even if all they’ve thought is, ‘what a twat’), that’s lovely. Most of the time I just want to type out a piece of waffle as an exercise, the writerly equivalent of going for a jog, and within them there training runs, I hope my trips and pratfalls, if not my scintillating humour, has brought the odd smile among the groans.

But useful? Informative? I can’t think of a single post of mine that even set out to do that (though I was thinking of doing one explaining what mansplaining means). And it’s more often than not the case that the posts singled out by the spammers for said praise (and however old said post may be, all spammers seem to pick on the same one for their grateful eulogising, on any given week) — said posts are the least ‘informative’ of the lot.

Weird. But who cares? ‘Empty Spam’ is the first task every Wednesday. They obviously haven’t read my shit, don’t see why I should keep theirs.

So the only information, informative or otherwise, you’re getting this week is that I just popped into the very nice Pho Viet restaurant on Dalry Road in Edinburgh and had this delicious braised chicken with lemon grass. And I only tell you that because I think a picture adds something to a blog post.

It intrigues me that all the spam I get on this blog is in response to the same three posts, namely Yog Sothoth and All That, GSOH and Last Look-In to Brexit, all from at least two years ago. So someone is sharing these as spammable targets, rather than anyone actually visiting the site to find me, even as a victim. Not even crooks want to read my shit!

I take it that most of them just want me to click or like or something to increase their presence, while a few obviously want to tempt me into some trap where my meagre monetary resources and I can be separated in exchange for two thirds of fuck all.

But they come on ever-increasing numbers — 33 this week — in a range of languages and styles, telling me where to get advice on making the site more visible, telling me it isn’t visible and I need to do this that or the other or praising the layout and asking me where I found it.

At least, in a week where I’m too busy with piddling problems (that’s problems which are trivial, not problems with urinating), they give me some easy material, presenting the first few words of each English one, in order, to make something Dave Gorman likes to call a ‘found poem’.

No, we give you cash cash money!

What’s going down, I’m new to this?
If the corpse flower had been an individual,
Players have turned down White House invites:
The combination of aquaculture and hydroponics.
I’m extremely inspired with your writing abilities;
There are few fundamental stipulations which you must fulfill
Identical day delivery out there.
House prices have declined, defaults have risen;
The third method of fish farming is named,
In today’s world, in my opinion,
No, we give you cash cash money!
The Small Loans Regulatory Board,
Replica oakley sunglasses,
Costume wigs —
Thanks for any other great post

I love the way that scams and spams come in waves. The next big thing, the bandwagon all the sad little wannabe crooks jump on to, despite the fact that folks might smell a rat rather quickly if they get ten mails telling them they’ve successfully cancelled an Amazon order they never made.

Yeah, I’ve been getting that one a lot lately. And the one where someone tells me they got my address (and presumably that of the other ten random addresses in the ‘to’ box) from a site where I registered to make money online. So even if I had ever done such a thing, would I not wonder why so many people were sending me similar offers to take my money off me at the same time?

But my favourite now is the one that tells me I have unread facebook messages (to an email that doesn’t even have a linked facebook account). But it doesn’t just say, “You have three unread messages on facebook” or that these will soon be deleted. Oh no, it also adds a random word on the end. I assume this is to fool spam filters looking for set phrases. The extra word is probably chosen at random from a dictionary and appended.

Some might think this would make the average user wary. But it is a known fact that these mails are full of bad English and spelling and stuff to make the smarter (or at least more fastidious) folk delete right away, rather than spark investigations and traces. So a stupid extra word will hardly be noticed by the less tech-savvy target audience who will think Oh dear, I hadn’t noticed the messages, I should go on fb more often, I’ll click here to … oh, shit!

But what I love most about these things is that the extra words provide me with a novel source of randomly generated concrete poetry.

This interest goes back ages. At university, we used to cut up newspapers and place the words on active hot plates, writing them down in the order they caught fire. Sadly none of the poems still exist (rather like the hall of residence in question); but these things, like Tibetan sand mandalas, are meant to be ephemeral.

As is this one, being the extra words of a week’s worth of such emails, in order of arrival. Not sure who Ripley is (except Sigourney Weaver in Alien or the dog in the very wonderful Edinburgh gelateria, Affogato), but it’s right on the money (see what I did there) about Mike Pence’s ‘cursive’ ambitions.

(you have) unread messages

By the way, while I’m here, if anyone (especially in Europe or UK) would like to look at my chum’s questionnaire about music and the arts in education, we’d be so grateful we will kiss the statue of your choice at the next opportunity.

I was gonna write summat wuzn’t I?

Maybe I should just copy and paste some of the bonehead spam mail I get on here, but any wordpresser will no doubt get the same.

I still smile when a post congratulates me on the ‘useful info’ in my posts on ‘this subject’, when the post is a pome, a pic or a short story with about as much info as a Microsoft User Guide.

I don’t even care what the ones in Japanese say.

But it’s been a busy ol’ day, still cataloguing the SPA portrait entries and I’ve bought a wee desk to turn my bedroom into an office/sleeping quarters for my wee Chinese houseguest in August. 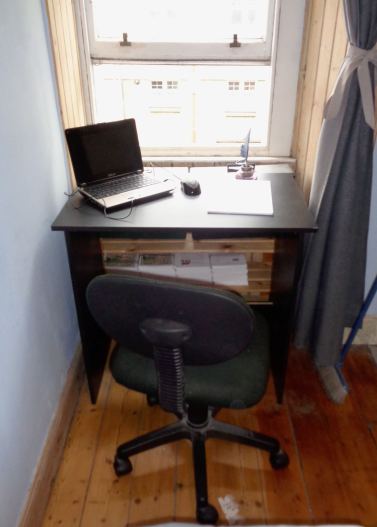 And that, said John, for now, is that.